Antonball Deluxe is one of those hidden gems you'd probably find out about through word-of-mouth about the local arcade if it existed in the 90s, tucked away as it's very own little unique cabinet in the corner, like...a hidden gem. Published by Summitsphere, it's a mix of three gamemodes, with the inspirations being pulled from Donkey Kong 94, Mario Bros. Classic, and Punchball Mario Bros.. Small, obscure stuff that translates to more regonizable formats, such as being able to call Antonball itself just Breakout-inspired if you're like me and had to explain it to your friend's dad once because he called it an uncle game.

Actually, here's the inspiration from the word-of-mouth of the head Summitsphere developer, Tony Grayson. Awesome guy, I'll get into that later.

There's a nice, colorful cast, of course, because what arcadeish title is without it's scrimblos? The blorbos? Scrimblo fucking Bimblo? But for now, I only go into depth on the main two.

Anton Ball, pest exterminator, after-hours alcoholic, grumpyass guy in general, but the anger issues get him where he needs to be. The alcoholic is censored as soda, though. Frequent flyer of Brulo's Casino, despite his lack of ever paying Brulo in the first place. Antonball starts with Anton walking out of said casino, and then he falls into an exposed manhole and into Boiler City's sewers. Get his ass out and back home by kicking a ball around and into bricks.

Annie Bell, who is Anton's co-worker, lives in the definition of a Detroit apartment (aka living like pure shit), and has a mean-girl ego that does not match her circumstances at all. At the start of Punchball, she finds an advertisement for a...Punchball competition, with the prize being a lifetime supply of her favorite drink. Clothes hastily put on, slamming the front door open, and she's on her way to kick mole ass.


Ok, but how about everyone else? Danton and Nina Small are basically the Mario and Luigi to these two unfunctional fuckers, being slightly-more-upstanding citizens and all. Brulo, the owner of an afformentioned casino, and the CEO of looking constantly done with everything. You get a few variations of Anton for shits and giggles, a playable enemy or two, Anton and Annie's respective dog and cat, Paul. You even get Peppino Spaghetti from Pizza Tower, which marks the first time he's been in a game, because who fucking knows if Pizza Tower is releasing anytime soon. Lots of colorful choices, each with expressive spriting, and almost all of them get some very nice voicelines. Paul. Unlock these fuckers, some VS. Antonball stages, and some music through a lottery system you get currency for by playing. Gacha system? I guess.

Alternatively, go through this video from Cuthbucket (very cool).

As for the gameplay itself, the words I'd use for it, other than what is explained above, is challenging, but rewarding. And I mean challenging, which is what makes it live up to other arcade-genre games at the time. At the same time, I'd also rather consider Antonball Deluxe a party game, because if you're having fun on your own, you'll have much more fun with other people to help. Trust me, plenty of hours I've spent just getting mad at my friends in Antonball. Plenty. I could've been writing this page, but I was experiencing, playing, and having fun. Antonball is also significantly more difficult than Punchball, and I'd chock this up to gameplay and also Punchball's lax scoring leading to a lot more extra lives. 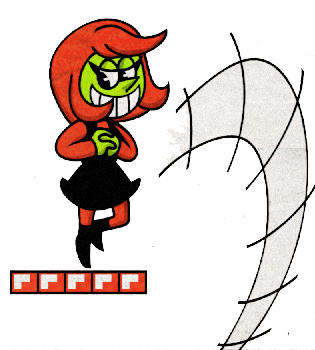 Overall, I'm in love with this game. The new Nephro autism era has begun for this fucking game. Look at this Annie art from a SAGE 2020 Demo how-to pamphet. She's sooooo scrimblo bimblo. I want to throw her at a wall and have her make a loud thud. The community is mostly Twitter shitposters and the official Discord, and holy shit I couldn't have asked for a more friendlier place to sit down in. The Summitsphere devs also, while varying levels of it, do stop in and chat sometimes. Tony Grayson just comes in and...rambles about the Anton universe sometimes, and when Tony does that, you can bet I've sat my ass down to listen. Also gives advice to other gamedevs, because making indie games is hard, and that is truly admirable, because keeping secrets is laaaame. At the same time, Tony keeps up a "just a regular-ass guy" image, and I've actually played Antonball Deluxe and even fucking ROBLOX with Tony. Fun times.

Official Discord, for the coolest and sexiest and most baller.