The New Eternal September, and Being Disabled Online While It Occurs

But then again, was there anywhere for me to go in the first place, being, welll...


While I try to stray away from mentioning it on other pages of my site, it does occasionally come up -- I am considered disabled. Not physically, mind you, this will not cover that. I have multiple mental disorders sprawling over both the sides of what one would call neurodivergancy, and the side of what is mental illness. It sucks, but I'd rather not host a pity party here over it. Neurodivergancy is a new and funny word, coming mostly from, well, the internet. There are a lot of disabled people on the internet, and if you asked me, I'd say that disabled people also are major creators on the internet, and it makes sense. For us, it's an easier way to communicate to keep it online and simple.

Or at least, it used to be. Within the last two years or so, the pandemic forcing more normal people to be online as much as we are for school and work, they've been able to explore the internet more than ever before. Niche websites no longer niche, and subcultures growing more popular as people find them. I guess this isn't neccessarily a bad thing, but I digress. Normies keep things alive and able to have money made off of them, but they also tend to dilute the subculture into being more acceptable to parade around in public. This includes places directly for disabled people (...like me) to be able to talk comfortably about the issues we have with our lives and what cards we've been dealt.

Before writing this, at a wit's end, I decided to look for one of those places on DISBOARD, which is basically just an advertising place for Discord servers. What I found was dissapointing, to say the least, and speaks more of a wider problem. A lot of the servers were for teenagers and younger, which is concerning giving how teenagers are with sharing their personal information online, and alienating because I usually don't like being around, say, anyone under the age of 15. Scrolling further -- a lot of these servers are obviously too friendly towards too obvious malingerers. Disorder fakers. This has grown expotentially since the pandemic started, and I'd say that if there was no pandemic, faking of a certain romanticizable disorder would've either stayed or died on fucking Tumblr. Now, there's entire conventions, communities, merchandise, for something actual doctors debate over if it's even real or not. A lot of the servers I saw for the disabled explicitly were aiming for this group of disorder fakers, it seemed, acting friendly, giving accomodations. 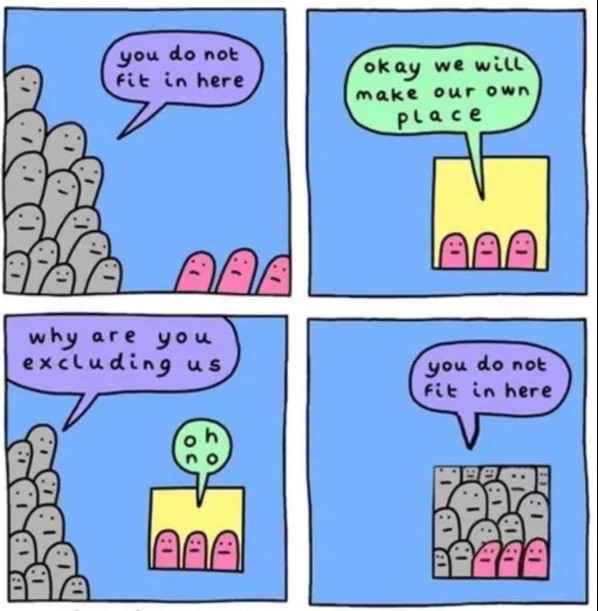 And maybe this is just me, but they all seemed too well held together. As if there was already a social line for the communinities and if I stepped out of that line, may Heaven grab my hands to save me from a screaming Hell. Every server I saw had to immedietly outline that if you didn't fit in the owner's personal Disability Discourse Opinion Box, go elsewhere. I am not good at staying within those lines, because my neurodiversity directly affects how I attend a social situation. I am often out of that line in general, hence how I ended up here in the first place. A normal person does not get this involved in small web communities, and if that bursts a bubble, I'm so sorry.

Oddly enough number two -- I found my best bet for disability support was to look the opposite way from those places aimed at it -- I've been able to find home recently in the official server for a game I've recently fallen in love with. Making a shrine-page for the game soon, of course! It's what I do. But everyone there kinda...got it. I wasn't good at being social, and it was ok, a silent approval of that. I feel welcome, loved by most, like I can actually talk and not worry about making people mad just by existing. Thank you, and if you are from that place, thank you even more.

Now, where does this tie into the idea of the Eternal September, where the people just living life on earth gain access to where only hobbyists have been? Because the entire internet seems like it's headed this way, since, well, after the pandemic started again. Remember the "Alternative" boom of Summer 2020, where teenage girls and alike suddenly wore all black and partied like it was 2006? Direct result of that. And it's only gotten worse for the underground communities I've been in since, including some breakcore artists, mobile games, looking at pretty things, and more. It's not just the youth, but the normie adults seem to be worse at blending in with the rest of the underground, which is...again, outcasts, more, and, bluntly, the disabled that spend a lot of time online because going outside is haaaard. Yeah, I know touching grass isn't that hard, and I've been doing that more and more often since this boom in subculture popularities has occured. Doing my art, my writing (like this one!), exercise, more. Getting into stuff I haven't cared about in years.

I'd also like to mention that this is why you just can't seem to ever escape politics online anymore. You used to, but you can't now, because the radicalized have spread, and so have the normies, the shitlibs, the 40 year old Facebook dads with their...y'know what I'm not going further into this point just know I'm right on it.

This has further isolated my disabled ass more than I was isolated when I was actively bullied for it in public schooling, where I went to the internet to just...hang out, be with people as weird as I am. But now people are socially ok and in these places and they make more rules and whatnot, and I always end up fucking things up for myself in those places. Flopping on the floor like a fish in my head right now, because that's all I can really do about it. I am just a fish in the ocean, and surfing the world wide web just isn't that fun anymore. And as fish do, it's a fight with other fish to survive. I guess I'm surviving ok so far. But I'm still a fish. Why am I a fish? Fish.

Q: What do you call a fish with no eyes?