Ever wanted to experience picking up an average /r9k/-/soc/ user? Well, now you can. And now she can get e-nerds.

Note: This page is not spoiler-free, with spoilers unmarked. In addition, any previous content warnings you have seen for Needy Streamer Overload also can apply here. 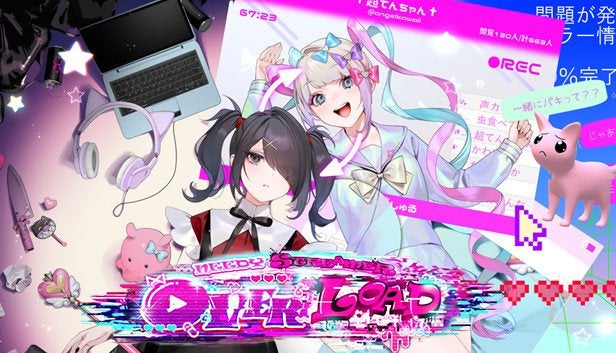 Needy Streamer Overload, announced last year as Needy Girl Overdose and then changed for copyright, is a game released just a few days ago as of writing this, and finds itself solid as a twist on the "princess raising" genre. These types of games aren't usually popular outside of otaku eastern audiences (the only other one i've seen fans of was teaching feelings, which is about rehabilitating a slave), so to hear about Needy Streamer Overdose on a high-traffic /v/ thread immedietly brought my interest. The concept was an instant catch -- you help a mentally ill woman hit her goal of stardom, of one million subscribers on Metube. And seeing the game poke hearthorns into the thread's posters -- had to check it out. Took a day of thinking about it, as with most of my Steam library, but I picked it up while it was still on sale. Oh, and what a game it is.

You play as P-Chan, who's existance is...debatable at best, and it starts with getting some texts from Ame-chan, the real star of the show here. She's an obviously mentally fucked school dropout, who's entire bit into entering streaming is to have a crowd of people at her whims and adoration. Your job in this is to manage that online presense, as well as most of her actions in general, as well as being her boyfriend. You can only stream at night, with the other two parts of the game dedicated to everything else. The entire game is situated on a desktop, and you have many, many options. You can hang out with Ame-chan, browse the web (including a nod at /vt/), take medication, sleep the days out, or go out for a trip to the outside worlds in a fake Japan.

And when it hits night and you don't decide to skip it for self-care or whatnot, you get to finally see Ame-chan stream! She puts on a wig, a holographic outfit, and adapts a new persona/alter-ego of an Internet Angel. Her name isn't Ame-chan here, but rather, omgkawaiiangel -- KAngel for simple short. And the time spent outside of this? Ideas harvesting! You can choose a variety of topics for her to go for -- gaming, conspiracy theories, chatting, asmr, thirstbait, hell, send her into a mental breakdown to really rack up some attention. All the while, skim the chat, select messages to read, prune the flames. Online, KAngel is known for the manic pixie dream girl act, and beloved by the world for it. As her camera cuts out with a BLESS, the comments go on, still, some wishing to save her, and sometimes, to see her fall.

Enough of the summary of what we're going into, though. The actual content NSO deals with is the modern internet hellscape. Ame-chan is heavily mentally ill, dependant on the attention of peers she's fallen behind from, and the web is not a great help to this, nor the whole streamer thing. Almost everything will cause her stress. Did I mention the balancing act known as the meters? You have to make sure she isn't stressed (she starts self-harming otherwise, makes you cut her as well, too.), balance affection delicately, and the main pointer to the theme -- Mental Darkness. Anything related to her presense on the web or of the uncanny topics that dwell will raise that meter. High enough, she can start taking drugs, of the legal and illegal variant. Pirated copies let her overdose and die, by the way. How wonderful.

The way you must treat Ame-chan with delicate hands, less she falls from holiness, is a great comparison to the fame of real streamers. They're being managed behind the streams, stressed as all hell, but whatever brings in the money and simps, amirite? In addition, P-chan is kept a delicate secret, and for good reason. Idol industry is no joke. The purity of the streamers in Eastern webs must be kept at all costs, and a great example of this was when a certain real virtual streamer had her information leaked of having a boyfriend in the past. Lots of crying fits on /st- i mean /vt/ over that one. It's a great satire on the entire industry, again. Even when she shows a naughty side on the sexy stream varients (you get banned if you do enough of these), it's intertwined with the innocense of a childhood friend who's just grown, but again, all an act to attract the desperate men who want an innocent girl of their own.

Ame-chan is a reflection of a generation of woefully internet-addicted women, and her game is a wonderful brush to expose that truth. These women are troubled, no less because of internet of the other circumstances of life and early family, and there's plenty of examples to go by the phenonemoum of e-girl drama to prove that. And yet, so many want to stick their dick in this crazy. The unpredictabiltiy is capitivating, but that's how KAngel gets her following, so does it matter if she's suffering so badly behind webcam? No. She has her attention.

The need for attention is great in today's modern web. Centralized internet has led to great competition, everybody's wishes to blow up on one witty comment or video, to reach a place to be idolized, to be watched, paid to advertise, to be loved.

Another great way that NGO communicates its message of WEB IS SHIT is the art style. The art style is perfect for the themery. It reminds me of a 2014-2018 era of Tumblr, with the overuse of pastels, cute anime girls, and again, the mental illness of the anime girls. It's a great way to both subdue and examplify what it stands for -- a pixel icon of Ame-chan that begs for you, begs for you to stay with her, begs for death, all within a cute chat app where sometimes, or most of the time, the best you can do is send a sticker of a pink cat only to be left on read. The backgrounds for each time of day are also similar to some vaporwave album covers I've seen, with the night theme a perfect replication of that nostaglia. The contrast between Ame-chan's real style versus the rainbow-covered KAngel leaves none to the oblivion of what they both stand for. KAngel is the screen, and Ame is the reality. But only you see that reality -- unless?

Unless. The game has a multitide of endings, and while I haven't finished some yet, they're all enough to make you wonder just what else the devs could throw at you. And only a few don't result in her downfall from fame, or you being left in the dust. And the devs have a handy function of being able to go back the beginning of any day in your save file out of the thirty she wants a million in. Handy feature for when you fuck up. And you will a lot -- I got flatline three times. Thanks, Ame.

Overall, I'd reccomend this game to anyone strong enough for the hit of the core message -- the modern web is stressful as fuck, and mental illness hurts not just the sufferer sometimes. It's well-designed, challenging, sastifying, and hell, maybe you, too, can fix Ame-chan. Personally, I want to be saved just as much as she does. Maybe Mocha Ray Cookie can be my P-chan. After all, I hear her when I don't take my silly pills. Help.


Want a related article on the web's woes of today's fame seekers? Check out my friend Nezu's article here.