"If you don't want it, please, could you just spit it out : 'Cause I can't take much more of this messing around" -Spit, Slutever


WARNING: Ok, seriously, if you didn't read the title, this deals with suicidal thoughts and whatnot. This also talks about trauma, mental illness, and the related. Viewer discretion is, well, advised.

It's been a problem since I was in elementary school, and like a nasty birthmark in a place you don't want one to be, it just never goes away. It's made me go to therapists, hospitals, anywhere, desperate measures from school and parents alike. A demon that haunts the shoulder, and a stain you just can't get rid of on your plate.

Every day, the thought comes along, about if I ended my own life. Every single day, sometimes less than other days, sometimes more casually than in those crisis days I have. But it still comes around a lot, and it's, well, a problem, but a problem that I don't think would ever go away. I know what causes it most times, but I always end up saying I don't know why if somebody asks, because the cause would take more than one sentence to explain. But every day it comes, and every day I consider commiting self-unalive.

It's like a solution to every problem that comes up. Room is messy? Dad's mad at me for it? I could clean it up, or I could just hang myself here and save him the college bills. Same old, same old. But I also don't ever end up acting on this, or hurting myself, or at least, not anymore. I get dangerously close to those edges, but never enough to actually do anything. I scream into the interwebs voids of whoever could listen to me that day of wanting to die, but nothing ever results. That's probbaly why I haven't had any more intensive care for my suicidal thoughts -- they're just thoughts. Thoughts and ideas by themselves cannot kill. Maybe these thoughts are a security blanket, because no matter what happens, at least I have a way out -- death!

Or a security blanket away from my past. My traumatic experiences have left me more disabled than I already was with genetic disabilty. I don't usually post about my mental disorder diagnosis list, but since it's relevant -- Autistic people are much more likely to develop C-PTSD. As a quick fresher, for those who don't know, C-PTSD is Complex Post Traumatic Stress Disorder, and is traumatic from a series of never-ending events that make somebody feel trapped, or something like that. Again, it has disabled me more than anything else ever would be able to. I would probably be normal enough to not even run this site if it wasn't for the alienation, the pain, the everything that C-PTSD hands me and tells me to go fuck myself with. The worst part is knowing it isn't really my fault I have C-PTSD, and the people who caused it are either long dead, my family, or both. No apologies. Fuck. 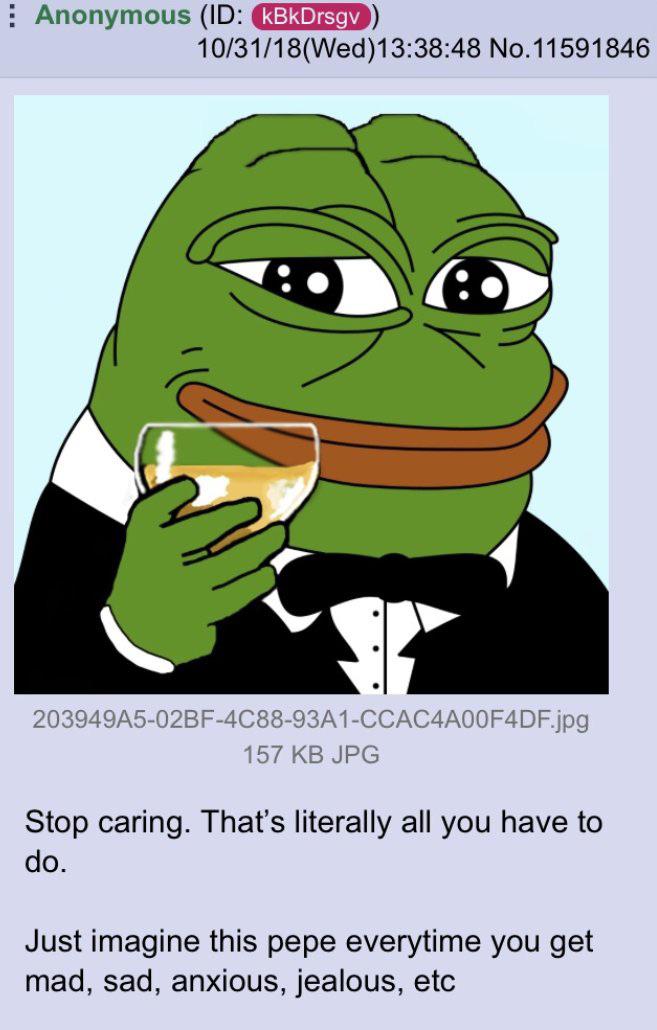 But in the last few years, my chronic suicidality has been getting better, and mostly in the last year or so. I've adapted a new mindset to combat this general cloud of illness -- I go through with a positive nihilism. Nothing in life matters, but that isn't a bad thing. It's actually really cool, because since it doesn't matter, I can stop giving a fuck about what bothers me, and boom, it no longer bothers me anymore. Literally just stop caring. I have the image right next to this in my wallet for a reason, a constant reminder -- I (usually) am able to stop things from hurting me now. Literally just stopped caring.

In addition, I have a slight list of other things here, and if you identified to this article, I think you can also try these.

- If it's avaliable, when I feel an episode coming on, I go to the nearest water fountain, and just splash cold water on my face. It interupts the head. Learnt this in group DBT when I was still in group DBT.

- Above anything else, distract. Distract yourself from those thoughts until the distraction overtakes the thought and it goes away. Copes are up to you -- I just hop on ROBLOX or watch Vinesauce. Specifically Vinesauce.

- Unironically the "name five things you can see, four you can touch" ect. thing works in the short-term.

- Above all, this is a waiting game. You just have to make it through the bad times to get back to the epic awesome times. You can do this! Lobster believes in you.

This probably comes off as a public vent, a pity party. It is a vent. I am allowed to be open about these things sometimes, as a treat. It is ok to shout into my personal void of a site as well. Again, if you identify with these thoughts, there is help. There is better times. As a closing note, while I do not avocate for going to therapy anymore for personal reasons, that is also an option, and it works for some people. I don't have much else to say, but reader, know that I love you like I love the rest of this world. I love you for even taking the time to visit my site, even if it was just the index and nothing else interested you. Having a stage to act and write like this is a gift. I love you. ❤