and it only took me until halfway through watching to memorize the title! 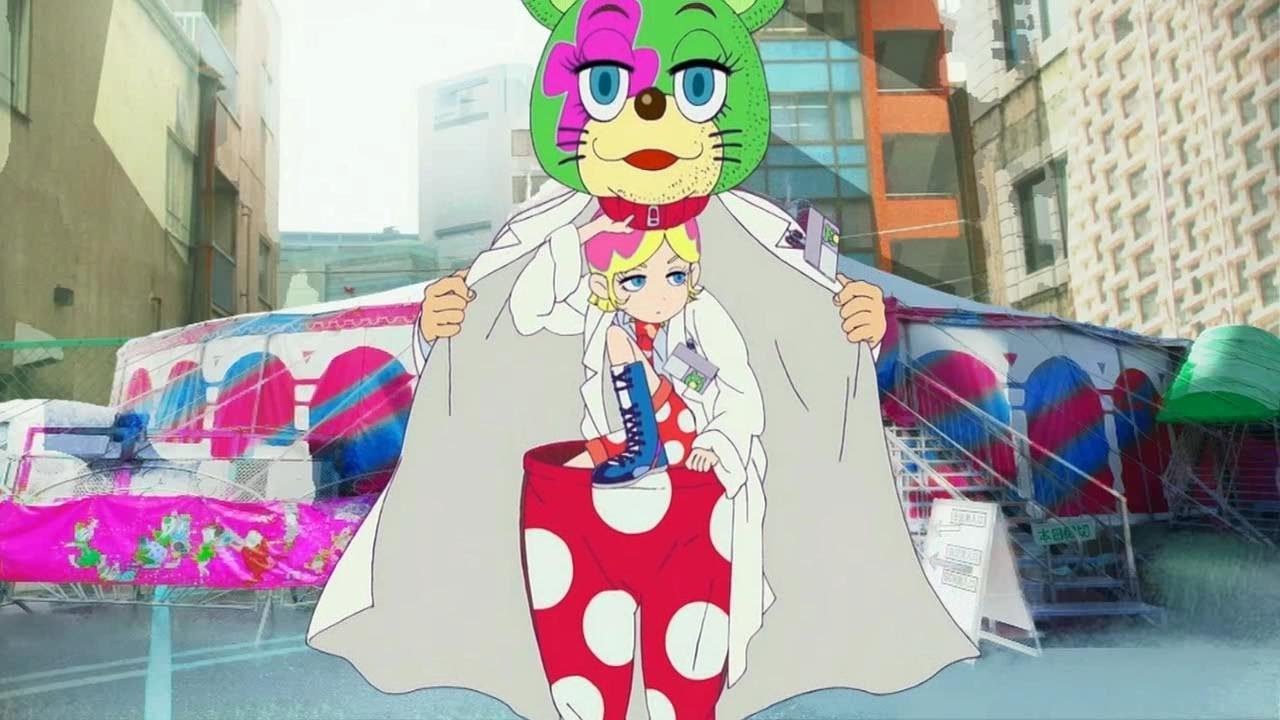 I don't watch anime a lot, and that's because, in general, the genre is overflowed with the same show with minor differences. You could say that about western animation, too, but in anime, it's a fucking plague. What I do tend to watch, however, is the shows famous for standing out in this wide-eyed field. One day on a certain Discord server, someone I knew posted a character that looked very interesting from first glances alone. Giant green and patterned bear suit thing with a labcoat on. I asked this person where this character was from.

Well, turns out that was Irabu Ichirou, the protagonist psychiatrist of Kuuchuu Buranko. The show is also known as Trapzee, and is an animated version of some popular short stories, some stories cut out, and an original one flung in as the last episode. What I discovered upon legally watching this was that it was the freshest breath of anime I could ask for, as well as being something I was interested in in general. I was excited to watch the second episode for the first time, which doesn't happen much. And to that, I credit the art style.

Kuuchuu Buranko stands out for being fucking weird, in the best way possible. It's weird in the ways where it's so weird that it turns some people off from the show, or makes them feel like the mentally ill one here, rather than Irabu's patients. The entirety of Japan is decorated in colorful, funky patterns, from buildings to automobiles, and the people that reside are just as strange. Unimportant side characters are displayed as paper portraits, which makes enough sense. The faces of some cut from the standard 2D to a painterly, realistic face. Irabu's nurse, Mayumi, is mostly seen as a 3D, recorded person in pink-punk uniform. Mayumi is one of my favorite parts of the anime, but that's for a few paragraphs down. And did I mention the licensed psychiatrist cutting saws in the cells and inputting medical information and corrections to his own show?

Speaking of, the psychiatry parts of the show are spectacular. They don't stigmatize, nor romanticize the mental health issues of the patients. A critique I have is that at least three episodes go over different types of OCD, which could've been cut down to one or two to make room for other conditions. And when conditions are exaggerated or misplayed, again, there comes that interuption to remind us of the simple fact that a show cannot show us everything, or else it'd be as entertaiming as real life, in other words, very boring. An accuracy to mental illness is rare in anime, mostly demonized rather than romanticized, but getting better over the ages.

And back to Irabu, the protagonist, our dearest doctor -- he manages to look more outwardly strange than his patients, no matter how out there the patients are. He has three forms, alter-egos, whatever it is. One's a childish adult in the green bear suit I mentioned beforehand, one is a mellowed child, and the last a feminine adult form of that child, both blonde and decorated in a similar way to that bear suit. They act unprofessional, perhaps even outside of medical guidelines, with Bear Irabu being the most notable out of this. His main plans for his patients are to push them to face what ails them, and defeat that great mental monster themselves. The amount of literalness in this varies, but for the OCD patients mentioned, there is exposure therapy for one. The three forms of Irabu are theorized on, but my personal theory for them is that it's a representation of one of psychiatry's famous ideas -- the Id, the Ego, and the Superego. Take of that what you will. The pre-treatment for the mentioned before, however, is getting his nurse to administer a nice, hefty vitamin shot. Irabu gets visibly...a little too excited at these. However, as crazed as Irabu's methods are, they always seem to work and cure. Onto his nurse, Mayumi, which I mentioned as being my personal favorite. She's into alternative fashions, asocial, and shows sadistic tendencies with those damn syringes. More emphasis on the asocial though. As mentioned, the artistic uniqueness of Kuuchuu Buranko with 2D-3D and special effects galore takes special focus on Mayumi. She's almost always shown as a 3D recording, and when she isn't her art style is notably more realistic than any of the other cast members, which, while not very animeish, are still, well, notably anime. The friend I mentioned above who reccomended me this anime described Mayumi to me as, with personality and appearance, some sort of anti-moe character. However, this seems to have had the opposite effect on me...weird moe is best moe.

The patients are taken in an episodic format, which leads to a rather nice pacing. However, they are not entirely seperate from each other -- patients interact with each other outside of the office, are foreshadowed before and referenced after their episode. This leads to the feeling of a very, very connected world, much like the bustling cities we live in today.

Overall, this anime has quickly become one of my favorites, and I'd definetly reccomend it to anyone who can stand unconventional art styles. If you really love the weird, as I do, however? Watch it right fucking now. Sit down on that therapist's couch and find some time for it. I promise, no regrets!