The Depths are a substantial area in the East to South-East vincinity of Sugarteara, characterized by their collection of trenches, arranged as if in a maze, as well as being nearly uninhatiable except for the most tough-doughed of cookies. The lack of food that isn't larger and more-pointy-teethed than you doesn't help matters, so most sane-minded cookies wouldn't dare step near.

This was also my birthplace, what could've been home if it wasn't for the city, and where I lived for about until I almost died for the second time. I was born here to parents who left, because perhaps that's just what lobsters do, or whatever they were, or were they also cookies? That's how bad the memories of them faded, because I know they exist, I've heard them speak, and then one day they vanished and I fended for myself, tended for my own bruises, hunted for my own food, scavenged amongst the meat of thirty-foot long monsters, fought other fish for the meat of the monsters. A life of survival and nothing else, and what calm there could've been was spent absent-minded. Young cookies don't think that deeply about those things, I was no exception, just "so where's the next meal going to be?", because that's all you could think when in such a hazardous place.

Of course, occasionally, my young self came upon camps by other lonely cookies, a stone pot with a certain Squid in it's infancy, and at one point a man who'd ran away so far from the city jail had even let me stay the night with him. He took pity on me, obviously, a young cookie, always bruised and beaten-looking, but too used to it to care. That was survival for me. 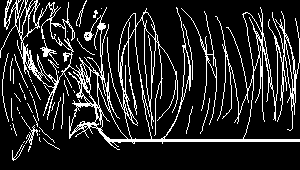