doors is actually a very simple game. there's a wikia for it over here, but i'm not a huge wikia fan, so here's some footnotes on how to play.

every playthrough of doors will go through a set of 100 randomly generated rooms, except for a few rooms that will appear every playthrough, with only a minute amount of these ever being in the same spot. the game, when it is not actively trying to kill you, relies on atmosphere for any sense of horror. the entire place feels barren except for yourself, and whoever you're playing with if you're going through a multiplayer round. sounds play at random, and will keep you on your toes, seeing as some of them do replicate actual dangers.

here's some of the mechanics of the game as well.

you can interact with the world around you, obviously. this mostly comes into play with hiding and checking drawers. you can hide in the closets, or under a bed, but you'll probably mostly use closets. this is neccessary to avoid several entities (they have a seperate page on my site, so don't worry!), however, hiding in one spot for too long will cause another entity to push you out and not let you back in for a while. checking drawers and other spots is a game of chance -- it will mostly be gold, which converts to knobs at the end of a round. it can also be several items, including a lighter or a flashlight to brighten dark rooms, lockpicks for when you just can't find the key for the next door, and "vitamins" (definetly ketamine) that speed you up and heal. also bandaids, which also heal. this also does not come without its own dangers. nothing is safe.

also, about the knobs -- they are only used for getting these items at the start of a run. very useful in crowded rounds. you can also buy revives before rounds, but those come at the price of roblox's actual paid-for currency. that's always nice, i guess. 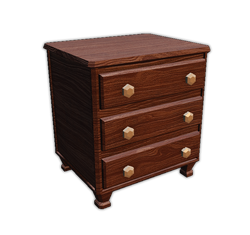 the entities are not all one-hit kills. some of them just take a chunk away at your health, which, again, can be healed afterwards.

when you do die in a round, you get a screen in a familiar shade of blue that also tends to highlight useful things during the game itself, which explains how you died and how to avoid doing it again. it's the closest this game has to an actual tutorial, seeing as the devs have stated it's one of those games that should be played blindly until you just get good. nobody does this anymore, do they?