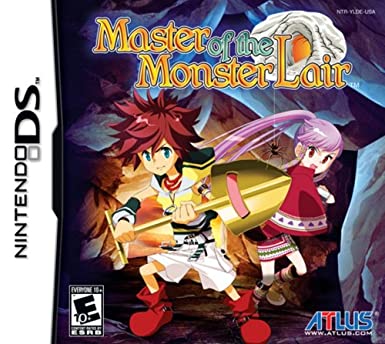 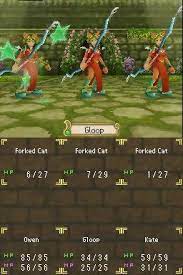 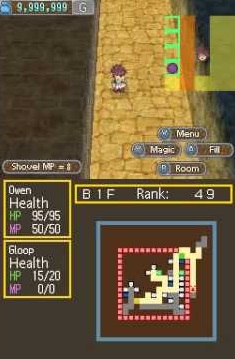 I have never, in my life, seen anyone else who has played this game so close to my heart. If anyone on this platform has, please comment on my guestbook immedietly and end my quest, and fufill the words spread by this shrine to it, to find someone else who knows of my youth's timewaster on the DS.

Master of the Monster Lair is a dungeon crawler game from ATLUS and, again, on the DS. Look at that intermediate anime style cover art. But this time, you build the dungeon yourself, lure your enemies into it, and smash them to bits, while being able to balance that with a comfortable life, unlike your other fellow adventurers, who, y'know, have to set up tents and stuff like peasants. You do this (you being Owen, the protagonist) at the sides of Kate (your childhood friend), Gloop (a random slime you find and take as an ally), and a talking shovel named...Shovel. These are your party members. Except for Shovel, who doesn't do shit except for cutscenes and story and whatnot.

The entire bit of the game is that the mayor of Owen's town wanted a tourist attraction, so Owen and his very new very strange talking shovel get to build it -- it's a dungeon, crawling with fiends that you now fend off every day. You can only edit your dungeon about a few squares each day, place down rooms for specific purposes (a bed, for example, so you can ambush a sleeping monster), and once you hit enough traffic on one floor, you'll fight a boss and move onto the next.

At the end of the day, you come back, Kate cooks you a meal, do it all over again. Daily progression.

As seen at the screenshot on the edge, the battles themselves are standard for a non-popular RPG. 1-3 enemies, attack, use magic, items, whatnot. It gets repetitive after a while, which is probably why I dropped the game halfway through completing it. Sorry.

MotML, however, still holds an edge to being one of the best games I played in my DS childhood that doesn't have unfortunate reasons for me owning it. I found it used in Gamestop. And I loved it, and that's what matters. The plot itself was both entertaiming for that childhood Nephro self, and I still think about it a lot. Tourist trapping, town politics, it has some depths to it that only the adult me sees now. And child(?) labor, of course, for what basically amounts to an amusement park for everybody else.

Oh, and there's also catgirls. What's not to like about catgirls?