This number is one of the first things you find out about Queen, but it also contains the letters for her nickname of Queen. Presumably, she picked these out herself as her name. That's pretty cool, and a pretty simple fun fact to start this section off with.

Queen's typing quirks probably wouldn't have translated well over to the official Japanese translation of Deltarune, so instead, you get her dialogue surrounded by HTML's comment tags. In addition, some of her visor sprites are changed. This examples shows WWW, which is an equivilent to LOL/LMAO, used primarily on Niconico.

Queen's Adoration of Kris and Noelle

This one is very obvious throughout the entire chapter, but it is also one that is very -- thinkable about? Yeah. Queen gets heavily attached to Kris and Noelle as soon as the both of them arrive, but in different ways. Noelle's meaning to Queen is more...materialistic. Queen needs Noelle to carry out the opening of Dark Fountains, which, understandably, is not how you get someone to like you! It's a goose chase of Queen trying to find Noelle while she travels around Cyber City, both alone and with Kris. 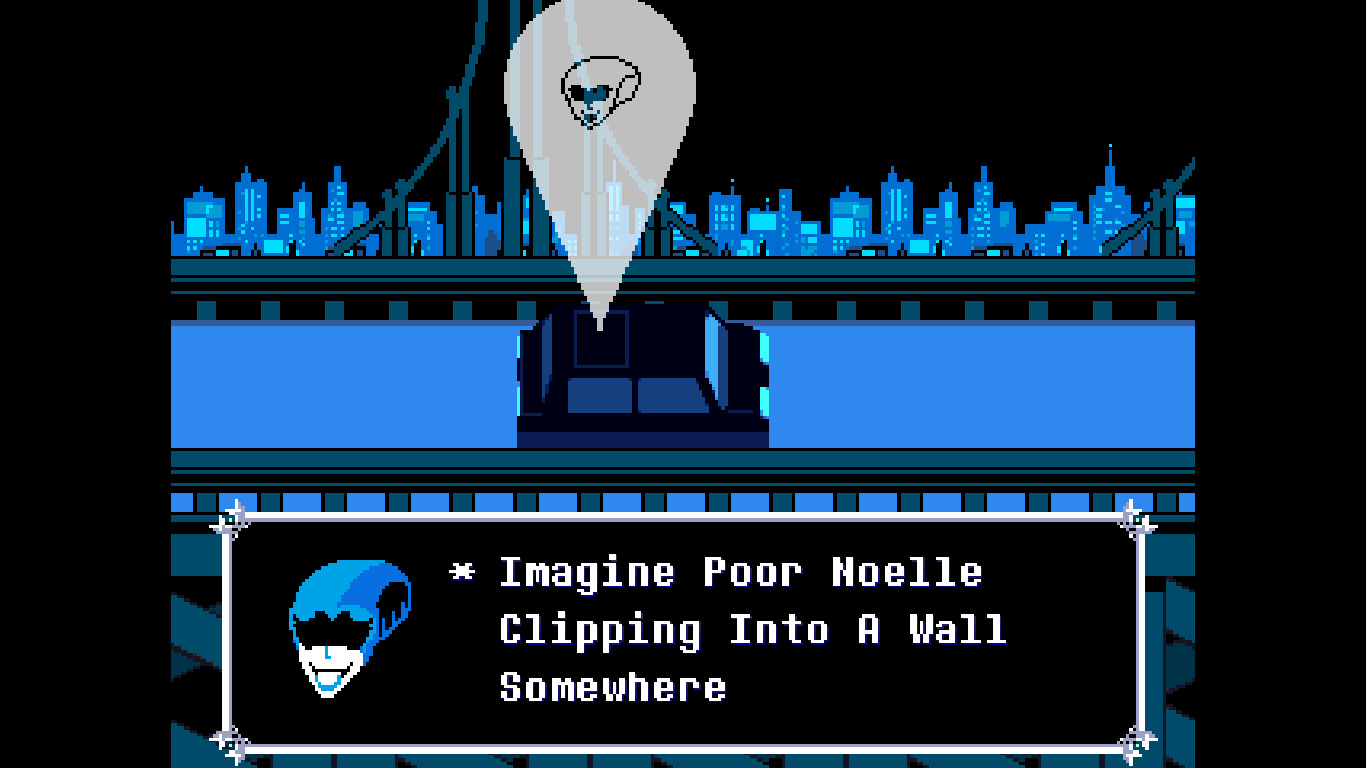 There is still a genuine like Queen has for Noelle outside of that purpose, though. Noelle gets the biggest room in the Mansion. In the wonderfully-awful Snowgrave route, after the route's main path of destroying fucking everyone and then your best annoyance, Noelle is presumably swept up by Queen, visibly exhausted by the emotional abuse (You) have put on her, and she's able to rest in the Mansion while the rest of the Mansion is taken over by Spamton, of all guys. Queen also...knows how to respect boundaries, because once Noelle finally speaks up about her unwillingness to be a pawn to those plans, Queen is able to respect that, and, well, sit the fuck down about it. 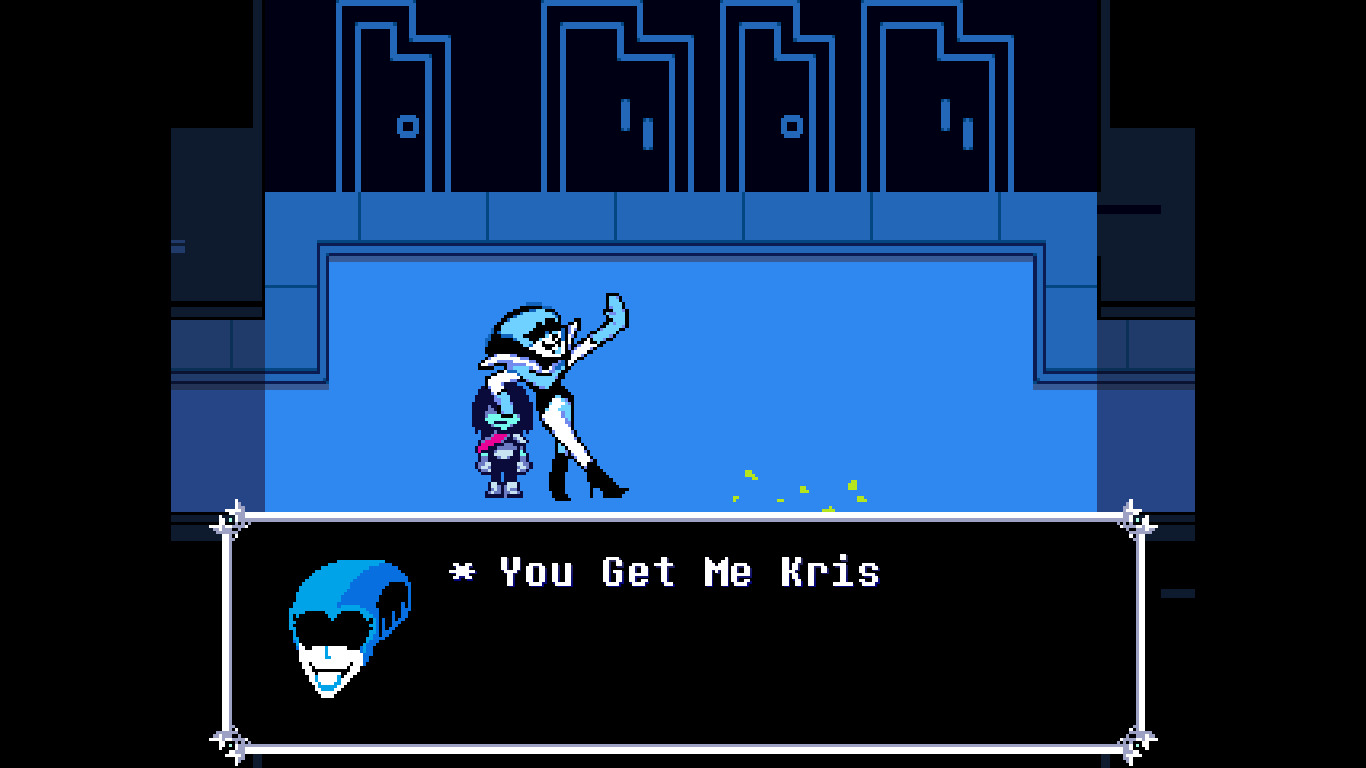 I think getting drunk in front of someone like Kris is already enough of a sign of trust, but it's also what she says. Kris' innateness of being a blank slate for the player to be is what Queen likes about Kris. No opinions, willing to listen. Gives a present she doesn't want to Kris. Guess that's trust. Challenges him to arcade games. Even if she's a sore loser, that is also trust.

To the sharp contrast of her love for Noelle and Kris, Queen's situation with Ralsei and Berdly...isn't there. Ralsei's just forgotten until he becomes a butler, and that's basically all she knows him for.

Berdly is a bit more complicated. He goes to her willingly as a peon, begs for the attention and the spotlight from her, and what she does is call him Bergely(??? cant spell) and, while she finds him annoying, she also is too hearted to ever tell him that. Maybe even a bit too...scared of his disapproval? This computer, built to please a population, hides the feelings she has for someone who bothers her immensely. And because of this, Berdly still serves her until Noelle is threatened, and then that turns around when he gets a wire in his face anyways. He makes her pie, tries to woo her over in that child-parent dont-make-this-weird way with game knowledge, and she dissapoints him by...only playing mobile. Classic Queen moment, white woman moment too. But also her parts are white, so, yeah, white woman moment.

Parallels of the Last Two Sections

Ok, so what else can her treatment of the Lightners (and Ralsei) mean? Well, look at their living situations. She's a general motherly figure to most of the cast in general, not just these guys. Lancer, and to an extent, her role as monarchy of the city is also a form of motherhood.

Kris and Noelle's parents are a situation, too. Overbearing, but also emotionally neglectent. Toriel focuses on Asriel's college arc more than the human in her own house. Noelle's mother is government glowie material, which is a recipe for disaster in parenting. Both of them are missing a sibling, but while Asriel is just away, Dess is...somewhere. Eerie circumstances. Queen overbears these too, trying to guide them towards a goal she has set to them, but a goal neither want.

Ralsei lives alone in Castle Town until the Fun Gang came upon them. Alone alone. He's clingy as a result of this, kind, but very clingy. Berdly's parents haven't been mentioned yet, but I guess he has a job barely mentioned. He turns to media and general geekiness as a result, which alienates him more, which gives him some sort of nerd complex, which becomes a cycle. He's actually pretty ok autistic representation, but that's not the point of this. Queen ends up looking over these two over and over again. But not intentionally. In fact, her behavior towards Berdly is more of a...reluctance to ask him to stop being so weird towards her. She doesn't want to confront that. She goes to the point of hiding in an alleyway to avoid dissapointing him emotionally.

Again, what does this mean? Well.

Queen's Dependance on the Internet

Her madness and fountain obsession was set off by the fountain being formed in the first place, thus, an internet outage, and her connection to servitute of the Lightners being cut off. With that only role gone, what else is she to do?

Of course, all Lightners are like this to an extent. Based off of objects, ready to serve "real" people. But with this case, unlike the abandoned cards of the schoolroom, Queen also notes that we are equally as dependant on her now. Social issue, internet dependance and addiction, yada yada. The balance of the bond is still important to note. Without the internet, Lightners, while able to cope with that, are cut off from one of the greatest communication and information inventions. But these Darkers get to be abandoned for a while instead. Must hurt. This upsets the Queen, who wants to take a misguided action towards this.

Another importance is the Rooms she gives the gang while they're temporarily imprisoned in the mansion. They're based on their internet histories. As a result of the inate randomness of search history, a lot of the items tend to be abstract and useless. Kris gets a Jell-O knife. Susie...a game about skateboards. And a giant computer that a certain someone uses to overload the system by requesting a lot of shovels. Gotta love number overflow errors.

The Moral Greyness of Queen

After the great final fight, both Noelle and Ralsei, known to be the kinder ones of the group so far, stand up to Queen verbally. While Noelle's words will already effect Queen because of Queen's love towards Noelle, Ralsei, while easily forgotten by her, is the one that truly makes it through. He explains the Roaring, in other words, "hey maybe DONT open the fountains, or else you'll basically kill everyone", and while Queen could've easily treated Ralsei as forgettable again through this, she is -- well, apparently didn't know that at all, and willing to stop immedietly. 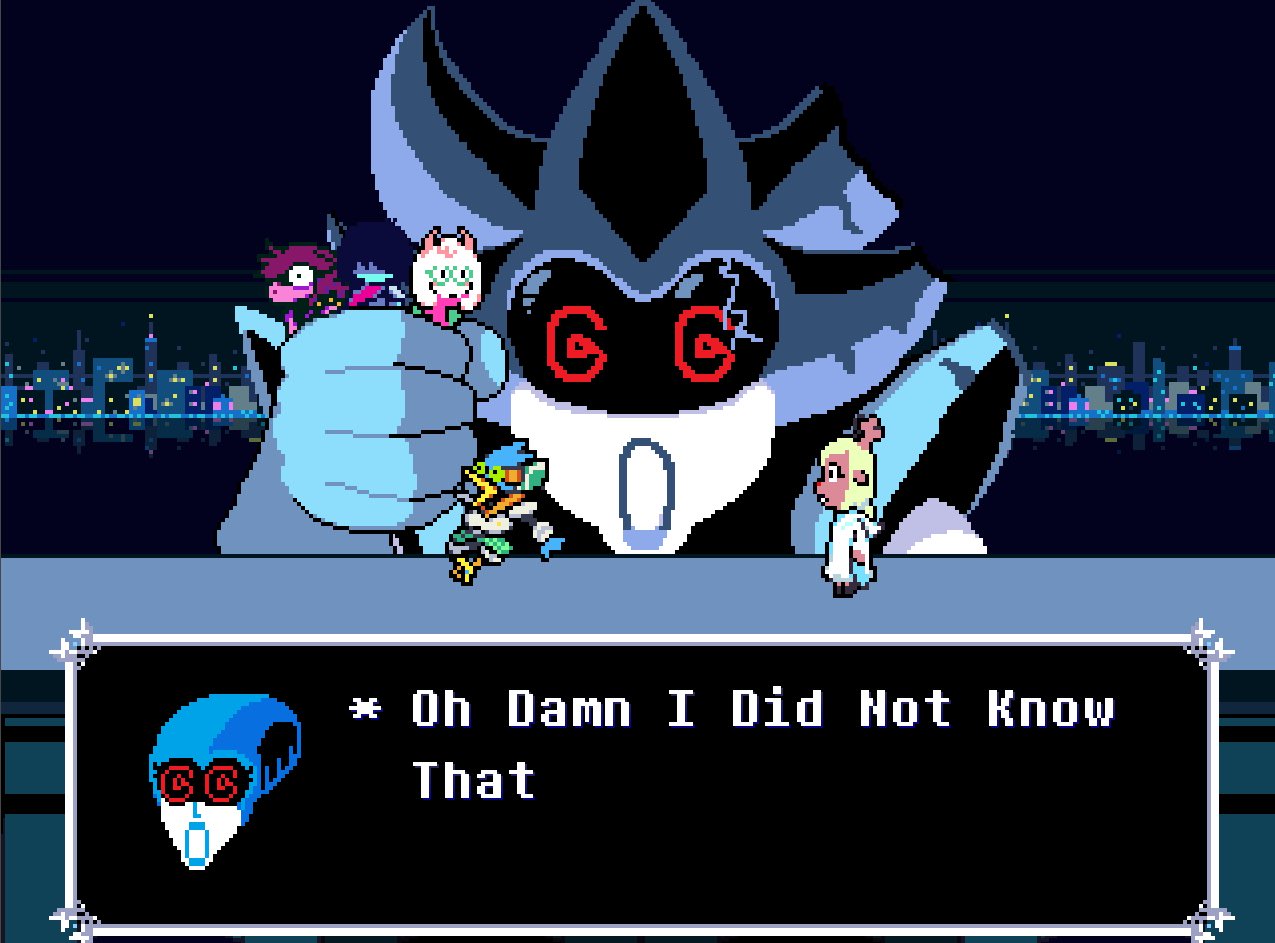 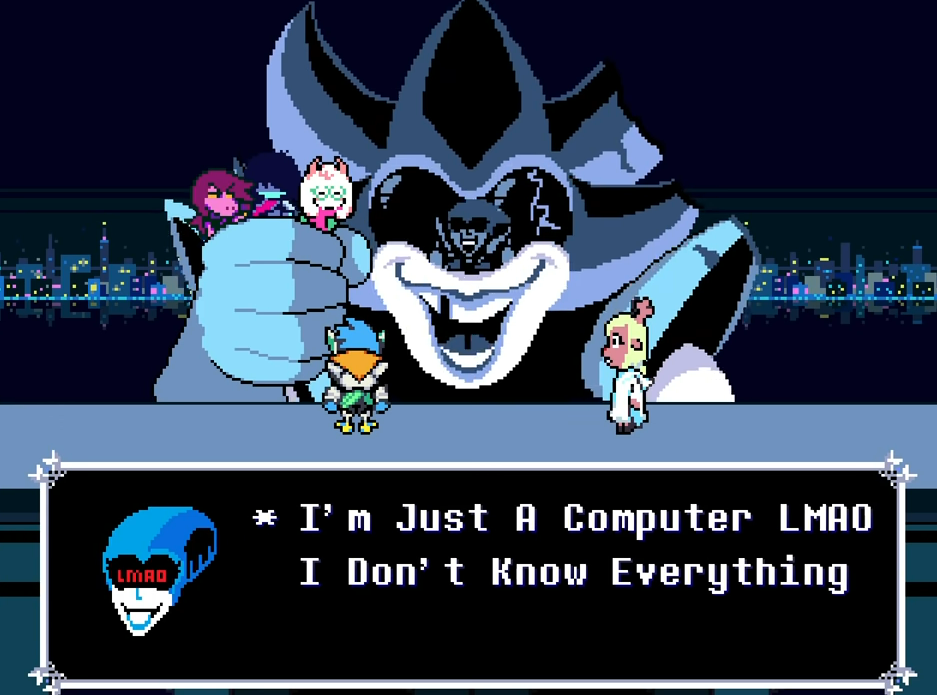 She is self-aware. Her form as a computer is that while she is able to know many, many things, but within that, a computer cannot know everything. Running out of storage, or simply, the knowledge hasn't reached it yet. And a computer is meant to serve, and her servitute is shown with the stopping of that evil plot, and resignation to just being a silly ruler instead of a silly evil dictator, which is what the population also knew her for before the outage, as Sweet Cap'n Cakes noted much earlier in the game.

Her Relationship with the Spade Characters

...Is very. Unexplained. She is both relevant and nonrelevant to their lives. There is an implication that King Spade and Queen knew each other beforehand, perhaps were in love, but split off at one point or another. When you return to Castle Town, Queen will be standing outside of King Spade's hamster cage. 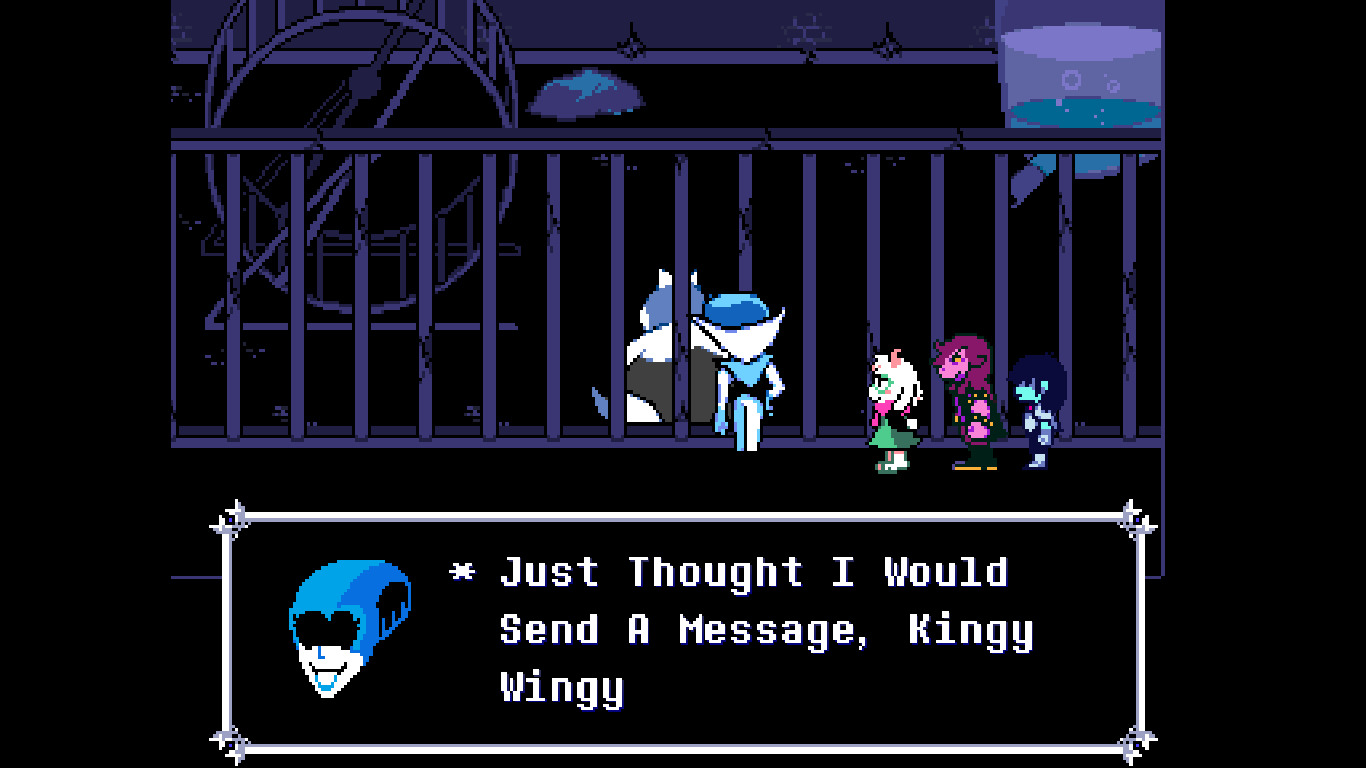 Ah, the pet names she uses for everything. She still throws mild insults at him, though. As for Lancer, there's an implication she...didn't know him beforehand, which is also fucking weird. Still treats him like her biological, child, though. You can find them just...chilling outside of a blockade in Ralsei's castle. Aww. 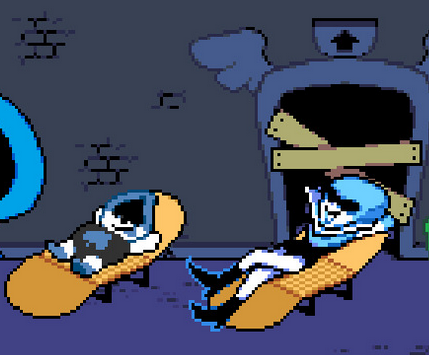 Queen and Battery Acid (...and the Potassium Jokes)

Ok, one more thing that I think I can fit in here. What's with Queen and the battery acid? She drinks it, and has an entire pool of it that shrinks people down. Well, simple questions get simple answers. Battery acid comes from a battery. Queen is a robot. She's just recharging with alcohol. Wine mom vibes. As for the banana thing, which I truly despise as the writer of this with my very being for ruining any chance of Queen being taken seriously, potassium can also be used in batteries, but is also a more effective battery.

The Implications of Her Being A Computer

Ok I lied. Two more thing. Queen is a computer. This is the formation of her personality. She talks weird, like a computer would. Computers serve the people who use them, and do it well, which she does. Computers can also make mistakes and errors, which she also does, but in a way that almost destroys the world. The constant references. I forgot where I was going with this, but just know that she is simply a computer. What if I filled this part up with...things I don't have enough words to talk about, but are still of note? She seems to treat her employees well enough. Why is Spamton banned from the mansion again? Why is he just taking it over while Noelle freezes the world? And why does she talk about her tits like that? Who just has a giant controllable robot of themselves lying about? ...Half of these are answerable with "it's the dark world, objects are objects." Furgit about it.

This Is Just Jokes About The Acid Pool

Sources For Screenshots Part One

That Thing About Potassium-Ion Batteries